The Feathers Inn, Hedley on the Hill

However did we manage without sat-navs? Well, we probably just planned the journey in advance, used a map, and got there on time without too much fuss. Yesterday, we set off on the 30 minute journey to the Feathers Inn without any prior knowledge of where we were really going. We arrived over an hour later, having at one point ended up on the longest, rockiest country track I've ever seen in my life. We also drove precariously across the narrowest bridge known to man, crossed the same river three times, and at one point, following directions from the lovely sat-nav lady, ended up in a field.
Not to worry though, we got there in the end. Even if our ears were popping from the ascent up the hill and our nerves were slightly shaken, we were hungry.
The Feathers Inn has been on my 'to do' list for a while now. Featured in the Good Food Guide 2011 and recently named Great British Pub of the Year, it's acquiring an excellent reputation both locally and nationally and I couldn't wait to sample their offerings.
It's a typical English country pub, cosy and without any pretensions. Lots of wood and a warm, rustic feel. A few locals prop up the bar with an ale in hand, and all tables are fully occupied with diners.
The menu features British food with a local twist. Most of the produce is sourced only a stone's throw from the pub, and suppliers are detailed on the back of the menu. For starters, we shared the charcuterie board, served with celeriac coleslaw, toast and pickles. 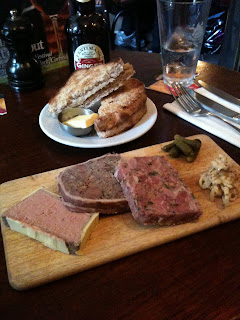 Pork and grouse terrine, and a chunky pressed ham hock were beautiful, but the chicken liver parfait is the highlight. Creamy, soft and meaty, almost the texture of butter, it was delicious lashed onto the toast. There was ample for two people, though I could have quite happily had some more of the parfait.
Moving on to the main courses, we ordered beer battered North Sea fish with chunky chips, tartar sauce and mushy peas, and the the sausages with creamy mash. 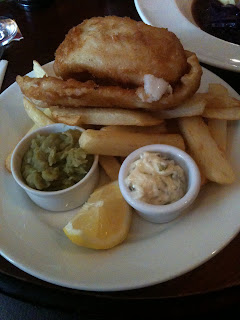 The fish was fresh, flaky and delicate, encased in a light batter and served with fluffy, perfectly seasoned chips. I could eat the chips again right now. Contenders for 'chip of the year'. 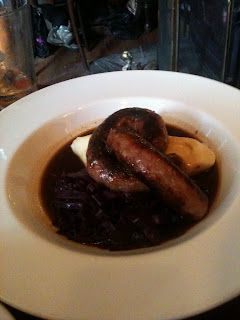 We could hardly manage a desert, but in the spirit of making an across the board judgement, we shared the dark chocolate brownie with chocolate sauce and wild cherry ice-cream. 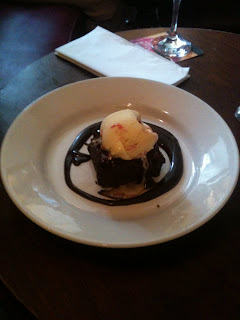 The picture does this no justice. It was rich, dark and moist, accompanied perfectly by the creamy and refreshing ice-cream. I don't have a massive sweet tooth, but this was a perfect round off to a perfect meal.
There's also an extensive, reasonably priced wine list, as well as a good selection of local ales. Service was friendly, knowledgeable and professional, striking the balance just right between not-being-there-when-you-want-them and in-your-face-annoying.
The bill came to £48, including 2 glasses of Pinot Grigio and a ginger beer. Very reasonable for such a lovely meal in great surroundings and excellent service. It was also refreshing to see that there wasn't a 'discretionary service charge' added to the bill. I'm all for tipping great service, but it isn't discretionary when it's already added.
The Feathers Inn really is something special, and I'll be back very soon.
Though next time, we'll just use a map.
Result: 10/10
The Feathers Inn
Hedley on the Hill
Stocksfield
Northumberland
NE43 7SW
Posted by Ruth at 13:31