The Best Pubs in Newcastle

If there's one thing that Newcastle excels itself in, it's the somewhat lost art of offering a really decent set of excellent pubs. Yeah, there's the usual endless selection of chains, the quayside establishments with beer soaked carpets and assorted collections of hen and stag dos, and the type of places that you've hopefully never witnessed the likes of until you've seen Geordie Shore. But if you're willing to do a bit of digging about, you'll find plenty of pubs that are nothing but bloody lovely.

Having recently ended up back in Newcastle after a brief return to the homeland, I set myself the selfless task of carrying out some thorough investigative research into what could be considered as the cream of the boozer crop. It's probably worth noting that my beer knowledge is somewhat limited. So while I'm not professing to be an expert on such matters, these are the places that I'd choose to head to when in need of a bit of alcoholic respite, and the places that I'd suggest to people who I generally don't dislike.

The Free Trade is my new local, but even if it wasn't, it's definitely worth a fairly long journey to get to. Firstly, THE VIEWS! Have you ever witnessed a pub with views as good as this? 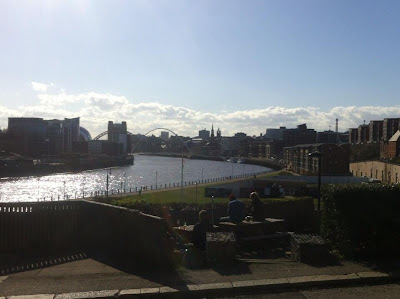 No, neither have I. But as well as having the best beer garden in the whole of the city (maybe even the whole of the North East), it's got plenty in the way of substance too. Absolutely loads of local beers, an impressive array of CAMRA and other awards from those who actually know stuff about this kind of thing, and some of the friendliest bar staff that I've witnessed in recent times.

If that wasn't enough, they've acquired a resident pub cat that goes by the name of Craig David. There's even a little collection pot on the bar in his name, and I have it on good authority that he's had all his injections and other such feline essentials funded purely through the kindness of regulars and passers-by. And if that doesn't make you feel a little bit better about the state of humanity, I don't know what will. 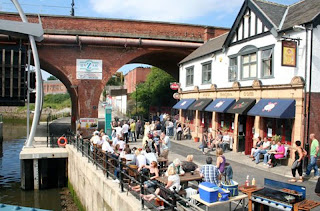 Just thirty seconds down the bank from The Free Trade is The Tyne Bar. It's what I'd call a summer pub, in the sense that there's loads of outdoor seating, a regular selection of gigs played outside, and it's right on the river. Located under Glasshouse Road Bridge, they've got some funky under-arch lighting craic going on, and there's even a few disco balls hanging about.

Go here for late afternoon boozing, or slightly later on when there's a certain sort of holiday vibe. Well, the closest that you're likely to find to that in Newcastle, anyway.

It's a bit hipster at times, but it's Ouseburn. Par for the course. 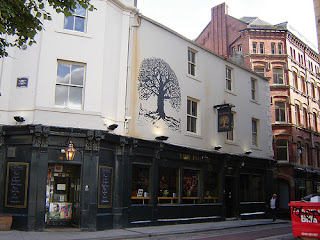 I've been darkening the towers of The Forth since my university days, and it's remained a firm favourite. A decent selection of beers, and a laid back feel that stays present whether you're there for a Saturday night or have turned up on Sunday under the premise of 'what makes you bad, makes you better'. The nooks and crannies make it a wise choice for a date pub, and the little terrace on the roof is a good spot if you fancy chain smoking loads of fags. They've even got a board that states it doesn't serve the likes of Malibu and Fosters and Smirnoff Ice, so you can rest safe in the knowledge that you can tell your pals that you've been in a proper place that doesn't give in to such tomfoolery. You're in the company of other such booze snobs.

There's also a canny quiz on a Monday night, and the food's pretty good too. 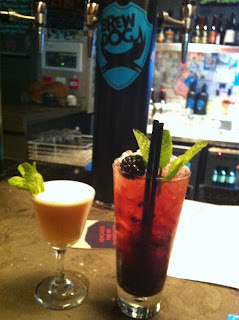 Is BrewDog a pub, or is it actually a bar? It doesn't really matter anyway, because it's smashing. Possibly the coolest start-up story of the past ten years, it involves two Scottish fellas with a passion for craft beer and a dedication to bringing it to the masses. Since 2010, they've opened nine bars in Scotland and England, one of which is on Newcastle's Dean Street.

Kitted out with an industrialist sort of decor with bare concrete walls, steel beams, the odd neon light and huge windows, they've got loads of beers on tap, including their core Punk IPA and Dead Pony Club lines. Recently too, they've started doing beery cocktails, which have become my go-to beverage when visiting.

Masses of attitude without being pretentious, and they've got boardgames too. Pubs with boardgames always earn a few extra points.


Obviously, this select few may be my personal favourites, but there's plenty more that could be strung onto the list to make up the finest of pub crawls. The Bacchus, Lady Greys, and The Bodega are close contenders that are worth a mention, and a visit, for that matter. Make a day of it and visit each one. It is summer, after all.

Email ThisBlogThis!Share to TwitterShare to FacebookShare to Pinterest
Labels: BrewDog Newcastle, Newcastle, Ouseburn, pubs, The Forth, The Free Trade Inn, The Tyne Bar