Ever since Carrie Bradshaw stepped her Manalo Blahniks into the Magnolia Bakery in New York, cupcake bakeries have sprung up on high streets all over the world. It's now fashionable to eat cake. London, unsurprisingly, have their own answers to Magnolia, notably at the Hummingbird Bakery, but us northerners haven't missed out on the trend.

I've been working in Sheffield for almost a year now and have planned on visiting this little cupcake shop, which is just 5 minutes from my house, since day one. Today, a lazy Sunday, was to be the day.


Firstly, Fancie is just so cute. I want to pack everything up into my handbag and take it home for my own kitchen. It's kitsch and fun, and I love it as soon as I walk in. The vintage china, all the photographs decorating the walls, the postcards, the 1960's records playing in the background. 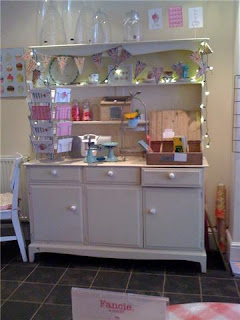 There's an impressive array of cupcakes in all different flavours, shapes and sizes, topped with swirls and sprinkles and fresh fruit and pretty much anything else you could want on top of your cake. I went for the banoffee. The cake itself was soft, moist, and left me wondering exactly how many bananas you need to use to make a cake this banana-y. In a very good way. I seem to have missed any toffee though. The buttercream swirl was fresh and light, sprinkled with chopped nuts. I have to admit that I don't actually have a massively sweet tooth, and I'm defeated after eating three quarters of it, in order to prevent death-by-cupcake. The cake was good though. The coffee would have been good too, if it hadn't been verging on luke warm. 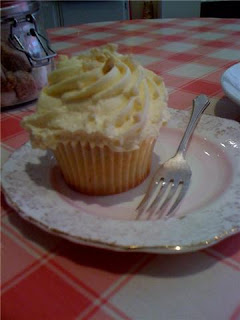 I think I arrived shortly after they'd just opened, and whilst I was first there, it filled up (which isn't particularly difficult as there's only four tables) within ten minutes. Various groups and couples came in to buy cakes to take away, and even a birthday cake was ordered. Get here early for a table, or be prepared to take a cake home with you. 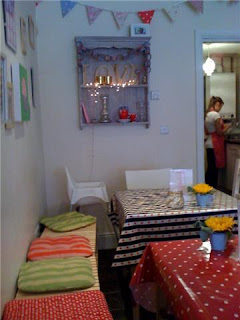 I'll go again. Probably for the cappuccino cupcake. It'd also be nice to see some savoury options.. though maybe that would be missing the point.