Last Friday evening, we were finally blessed with some good old sunshine in Newcastle, and this of course called for some al fresco action. I'd just arrived home after a two and a half hour train journey, and we had no reservations or particular plans. I did really really want pizza though - good pizza. We popped into a few of our favourite haunts on the Quayside, but were told that they had no outside tables free for the next few hours. Newcastle is seemingly not well prepared for people wanting to dine outside. And really, why would it be?

We eventually stumble upon Roscos. It's fairly new, and was highly recommended by a friend who's ate there several times. I'd been myself a few months ago, and both the pâté and the seabass were good. It should be noted though that visit was shortly after me and aforementioned friend had enjoyed several bottles of wine, so I can't vouch for how reliable that view may have been.

So we sit outside, where the Italian waiter brings out seemingly endless trays of cocktails out to the ladies on the table next to us.. and we wait, and we wait, and we wait some more. I try to get his attention several times, but his only interest is chatting up these women. My boy thankfully goes inside to order. My good-weather-induced-good-mood is wavering by this point, and I'm just tired and hungry.

After some rather disorganised service, I eventually get the Marco pizza - local goat's cheese, red onion, slow roasted tomatoes, wild rocket and a balsamic reduction. I have to admit that the base can't be complained about. It's thin, doughy, slightly crisp on the edges and elastic and soft towards the centre. The toppings are sparse though and lacking in flavour - two very small clumps of goat's cheese, and not enough of anything else. It needs pepper, which I wasn't offered. 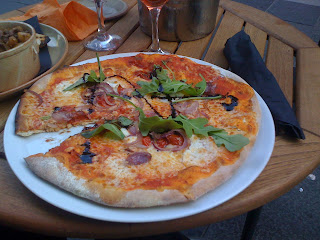 My boy gets the Tuscan lamb stew. He says it's okay, though the lamb is chewy.

I'm generally not a rosé drinker, so can't express too much of an opinion of the house bottle that we ordered. It was drinkable, if a little bit vinegar-ish.

The bill (which takes a good fifteen minutes to track down) comes to around £40.

I politely mentioned to the waiter that we'd practically been ignored by the staff, despite other tables getting undivided attention. He shrugged, looked over to the Italian, who was still chatting to the ladies, and said 'That's what he's here for'.

I wanted to like Roscos, I really did. Good service would have probably turned the average food into a far better experience, but it wasn't to be.