So a few weeks ago, I jumped on the veg box bandwagon and received my first delivery from The Veg Box Company. £12 got me the couple's fruit and veg box, packed with more than enough to feed two people for a week. The challenge was this though: could I actually use it all in a week to create lovely, healthy recipes? Or would it end up shrivelled in its box, forgotten about while I was easily persuaded to go out for dinner after work, or low and behold, pop into Tesco?
In the end, I surprised even myself. A week after it had been delivered, all that was left was a single orange. It probably goes without saying, but one of the best things about getting a veg box is that you don't know what you'll be getting, other than that it'll be local, seasonal produce. Planning what you'll make therefore turns into quite an exciting little project.

Everything was used without too much ado, and it was actually quite nice to make meals led by the content of the veg box rather than having to think of endless ideas off the top of your head. All the produce was really fresh and high quality, and my only complaint would be that there was nothing too 'out of the ordinary'. Probably a plus really, in terms of getting everything used, but it would have been nice to see something that you might usually have to go out of your way to find. The content of the boxes changes weekly though, so maybe next time I'll be able to have a moan that I don't know what to do with all these weird and wonderful vegetables.

I made frittatas, stir fries, numerous honey roasted vegetable side dishes, a Sunday roast with all the trimmings, and on lazy evenings, just whatever was in the fridge with a tray of roasted vegetables. A caramelised onion and tomato tatin was a particular success. Yes I cheated and used ready made pastry, but really, who has time to make their own on a weeknight? 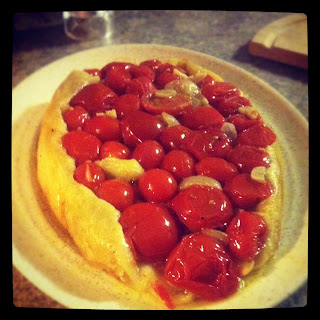 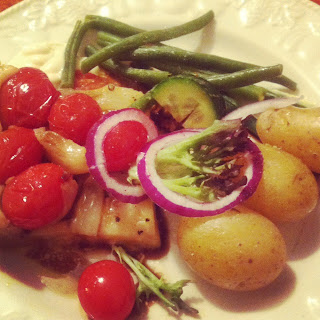 All in all, my little veg box experiment was a resounding success. Buying from local suppliers such as The Veg Box Company isn't going to change the world, but it will mean that you have lovely local produce at fair prices while supporting people who are passionate about what they do. Buy a box. You won't be disappointed.
Posted by Ruth at 18:15